Chandrayaan-2 is the second lunar exploration mission developed by the Indian Space Research Organisation(ISRO),after Chandrayaan-1.It consists of a lunar orbiter,  , and the Pragyan lunar rover, all of which were developed in India.The main scientific objective is to map the location and abundance of lunar water via Pragyan, and ongoing analysis from the orbiter circling at a lunar polar orbit of 100 × 100 km.

The mission was launched on its course to the Moon from the second launch  Dhawan Space Centreon 22 July 2019 at 2.43 PM IST (09:13 UTC) by a Geosynchronous Satellite Launch Vehicle Mark III(GSLV Mk III).The craft reached the Moon’s orbit on 20 August 2019 and began orbital positioning manoeuvres for the landing of the Vikramlander. Vikramand the rover were scheduled to land on the near side of the Moon, in the south polar regionat a latitude of about 70° south at approximately 1:50 am on 7 September 2019 and conduct scientific experiments for one lunar day, which approximates two Earth weeks.

However, the lander deviated from its intended trajectory starting at 2.1 kilometres (1.3 mi) altitude,[28] and had lost communication when touchdown confirmation was expected. Initial reports suggesting a crash have been confirmed by ISRO chairman K. Sivan, stating that the lander location had been found, and “it must have been a hard landing”.

As of 8 September 2019, on-going efforts are being made by ISRO in hopes of restoring communications withVikram. Communication attempts will likely cease on 21 September 2019, fourteen days after Vikram’s landing attempt. The orbiter, part of the mission with eight scientific instruments, remains operational and is expected to continue its seven-year mission to study the Moon.

The mission was launched on a Geosynchronous Satellite Launch Vehicle Mark III (GSLV Mk III) with an approximate lift-off mass of 3,850 kg (8,490 lb) from Satish Dhawan Space Centre on Sriharikota Island. As of June 2019, the mission has an allocated cost

of ₹978 crore (approximately US$141 million) which includes ₹603 crore for space segment and ₹375 crore as launch costs on GSLV Mk III. Chandrayaan-2 stack was initially put in an Earth parking orbit of 170 km perigee and 40,400 km apogee by the launch vehicle.

As of September 2019, the Chandrayaan-2 orbiter is orbiting the Moon on a polar orbit at an altitude of 100 km (62 mi).The orbiter carries eight scientific instruments; two of them are improved versions of those flown on Chandrayaan-1. The approximate launch mass was 2,379 kg (5,245 lb).The Orbiter High Resolution Camera (OHRC) will conduct high-resolution observations of the landing site prior to separation of the lander from the orbiter. The orbiter’s structure was manufactured by Hindustan Aeronautics Limited and delivered to ISRO Satellite Centre on 22 June 2015.

The mission’s lander is called Vikram  Pronunciation  named after Vikram Sarabhai (1919–1971), who is widely regarded as the founder of the Indian space programme.

The Vikram lander detached from the orbiter and descended to a low lunar orbit of 30 km × 100 km (19 mi × 62 mi) using its 800 N (180 lbf) liquid main engines. It then performed a comprehensive check of all its on-board systems before attempting a soft landing that would have deployed the rover, and perform scientific activities for approximately 14 Earth days. Vikram spacecraft apparently crash-landed.The lander’s location has been spotted on the surface via thermal imaging, but its condition is unknown. The approximate combined mass of the lander and rover is 1,471 kg (3,243 lb). 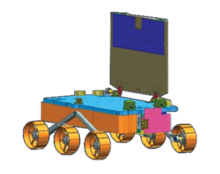 The mission’s rover is called Pragyan  Pronunciation with a mass of 27 kg (60 lb), would have operated on solar power. The rover was to move on 6 wheels traversing 500 meters on the lunar surface at the rate of 1 cm per second, perform on-site analyses and send the data to the lander, which would have relayed it to the Mission Control on the Earth. For navigation, the rover uses