Every living plant and animal must have energy to survive. Plants rely on the soil, water, and the sun for energy. Animals rely on plants as well as other animals for energy.In an ecosystem, plants and animals all rely on each other to live. Scientists sometimes describe this dependence using a food chain or a food web.

Food ChainA food chain describes how different organisms eat each other, starting out with a plant and ending with an animal. For example, you could write the food chain for a lion like this

The lion eats the zebra, which eats the grass. Here is another example in picture form:

The grasshopper eats grass, the frog eats the grasshopper, the snake eats the frog, and the eagle eats the snake.
Links of the ChainThere are names to help describe each link of the food chain. The names depend mostly on what the organism eats and how it contributes to the energy of the ecosystem.

Lets go back to this example:

Energy is LostLike we said above, all the energy made in the food chain comes from the producers, or plants, converting sunlight into energy with photosynthesis. The rest of the food chain just uses energy. So as you move through the food chain there is less and less energy available. For this reason, there are less and less organisms the further along the food chain you get.In our example above, there is more grass than zebras, and more zebras than lions. The zebras and lions use up energy doing stuff like running, hunting, and breathing.Each Link is ImportantLinks higher up in the food chain rely on the lower links. Even though lions don’t eat grass, they wouldn’t last long if there wasn’t any grass because then the zebras wouldn’t have anything to eat.

Food WebIn any ecosystem there are many food chains and, generally, most plants and animals are part of several chains. When you draw all the chains together you end up with a food web. 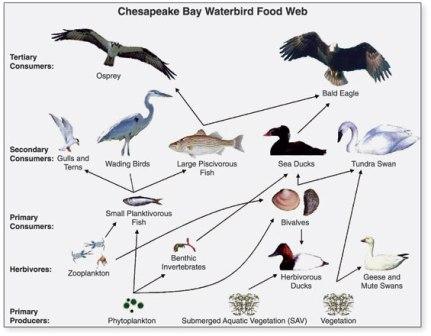