A hurricane is a large rotating storm with high speed winds that forms over warm waters in tropical areas. Hurricanes have sustained winds of at least 74 miles per hour and an area of low air pressure in the center called the eye.It can be up to 600 miles across and have strong winds spiraling inward and upward at speeds of 75 to 200 mph. Each hurricane usually lasts for over a week, moving 10-20 miles per hour over the open ocean. Hurricanes gather heat and energy through contact with warm ocean waters. Evaporation from the seawater increases their power. Hurricanes rotate in a counter-clockwise direction around an “eye” in the Northern Hemisphere and clockwise direction in the Southern Hemisphere. The center of the storm or “eye” is the calmest part. It has only light winds and fair weather. When they come onto land, the heavy rain, strong winds and large waves can damage buildings, trees and cars. 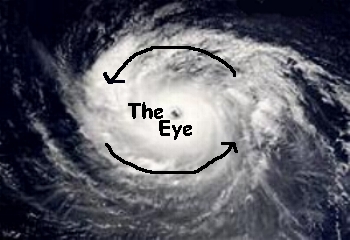 How do hurricanes form?Hurricanes form over the warm ocean water of the tropics. When warm moist air over the water rises, it is replaced by cooler air. The cooler air will then warm and start to rise. This cycle causes huge storm clouds to form. These storm clouds will begin to rotate with the spin of the Earth forming an organized system. If there is enough warm water, the cycle will continue and the storm clouds and wind speeds will grow causing a hurricane to form.Parts of a Hurricane 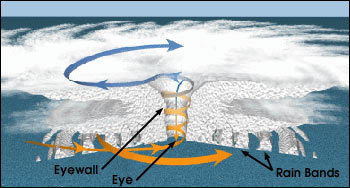 When do hurricanes occur?Hurricanes that form in the Caribbean and the Atlantic Ocean occur between June 1st and November 30th each year. This is called hurricane season.Why are hurricanes dangerous?When hurricanes strike land they can cause huge amounts of damage. Most of the damage is caused by flooding and storm surge. Storm surge is when the ocean level rises at the coastline due to the power of the storm. Hurricanes also cause damage with high speed winds that can blow down trees and damage homes. Many hurricanes can develop several small tornados as well.How are they named?Hurricanes in the Atlantic are named based on a list of names maintained by the World Meteorological Organization. The names go in alphabetical order and the storms are named as they appear. So the first storm of the year will always have a name that starts with the letter “A.” There are six lists of names and each year a new list is used.CategoriesTropical cyclones are categorized according to the speed of sustained winds.