A thunderstorm is a storm with lightning and thunder. Its produced by a cumulonimbus cloud, usually producing gusty winds, heavy rain and sometimes hail.

The basic ingredients used to make a thunderstorm are moisture, unstable air and lift. You need moisture to form clouds and rain. You need unstable air that is relatively warm and can rise rapidly. Finally, you need lift. This can form from fronts, sea breezes or mountains.

When are thunderstorms most likely to occur.

Thunderstorms can occur year-round and at all hours. But they are most likely to happen in the spring and summer months and during the afternoon and evening hours

How Many  Thunderstorms occur in every day.

It is estimated that there are around 1,800 thunderstorms that occur across our planet every day.

Yes, despite their small size, all thunderstorms are dangerous. Every thunderstorm produces lightning, which kills more people each year than tornadoes.

Lightning is a bright flash of electricity produced by a thunderstorm. All thunderstorms produce lightning and are very dangerous. If you hear the sound of thunder, then you are in danger from lightning. Lightning kills and injures more people each year than hurricanes or tornadoes; between 75 to 100 people. 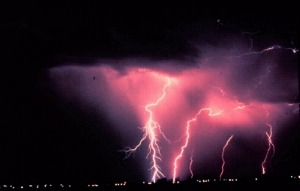 Lightning is an electric current. Within a thundercloud way up in the sky, many small bits of ice (frozen raindrops) bump into each other as they move around in the air. All of those collisions create an electric charge. After a while, the whole cloud fills up with electrical charges. The positive charges or protons form at the top of the cloud and the negative charges or electrons form at the bottom of the cloud. Since opposites attract, that causes a positive charge to build up on the ground beneath the cloud. The grounds electrical charge concentrates around anything that sticks up, such as mountains, people, or single trees. The charge coming up from these points eventually connects with a charge reaching down from the clouds and – zap – lightning strikes!

Have you ever rubbed your feet across carpet and then touched a metal door handle? If so, then you know that you can get shocked! Lightning works in the same way.

Thunder is caused by lightning. When a lightning bolt travels from the cloud to the ground it actually opens up a little hole in the air, called a channel. Once then light is gone the air collapses back in and creates a sound wave that we hear as thunder. The reason we see lightning before we hear thunder is because light travels faster than sound!


How Do You Know Lighting Is Near by ?

If you see dark clouds, then lightning could be present, but the best thing you can do is to listen for thunder. If you hear thunder, then you need to go indoors or get in a car. Don’t be outside, where lightning could strike! If your hair stands on end or your skin starts to tingle, lightning maybe about to strike. Get down on your hands and knees and keep your head tucked in. Do not lay flat, because it can give lightning a better chance of strike you.

How far away can you see lightning and hear thunder?

Within those distant thunderstorms, the lightning bolts can be seen as much as 100 miles from us, depending on the height of the bolt, the clarity of the air, and our elevation. Thunder, in comparison, has a much shorter range of detection – usually less than 15 miles in a quiet rural setting and under 5 miles in a noisy city environment.
you can use thunder to tell how far away a storm is. Next time you see a storm, count the number of seconds between when you see the lightning and hear the thunder. Take the number of seconds and divide by 5 and that will tell you how far away the storm is in miles. For example: If you counted 10 seconds between the lightning and the thunder, the lightning is 2 miles away!

Hail is created when small water droplets are caught in the updraft of a thunderstorm. These water droplets are lifted higher and higher into the sky until they freeze into ice. Once they become heavy, they will start to fall. If the smaller hailstones get caught in the updraft again, they will get more water on them and get lifted higher in the sky and get bigger. Once they get lifted again, they freeze and fall. This happens over and over again until the hailstone is too heavy and then falls to the ground.

What Causes wind to Blow?

As the sun warms the Earth’s surface, the atmosphere warms too. Some parts of the Earth receive direct rays from the sun all year and are always warm. Other places receive indirect rays, so the climate is colder. Warm air, which weighs less than cold air, rises. Then cool air moves in and replaces the rising warm air. This movement of air is what makes the wind blow.

What is a gust front?

A gust front is the leading edge of the downdraft from a thunderstorm. It is usually marked by gusty cool winds, and sometimes blowing dust. You will feel the wind from the gust front before it starts to rain.