A winter storm is an event in which varieties of precipitation are formed that only occur at low temperatures, such as snow or sleet, or a rainstorm where ground temperatures are low enough to allow ice to form (i.e. freezing rain). In temperate continental climates, these storms are not necessarily restricted to the winter season, but may occur in the late autumn and early spring as well. Very rarely, they may form in summer, though it would have to be an abnormally cold summer, such as the summer of 1816 in the Northeastern United S

A winter storm is an event in which the main types of precipitation are snow, sleet or freezing rain.

Everyone is potentially at risk during winter storms. The actual threat to you depends on your specific situation. Recent observations show that:

How do winter storms form?

Just like any other storm at other times of the year, the right combination of ingredients is necessary for a winter storm to develop.

Three basic ingredients are necessary to make a winter storm:

How do blizzards form?

A blizzard is a long-lasting snowstorm with very strong winds and intense snowfall. You need three things to have a blizzard; cold air at the surface, lots of moisture, and lift. Warm air must rise over cold air.

What are snowflakes?Snowflakes are made of ice crystals. Each snowflake is six-sided and made of as many as 200 ice crystals. Snowflakes form in clouds where the temperature is below freezing. The ice crystals form around tiny bits of dirt that has been carried up into the atmosphere by the wind. As the snow crystals grow, they become heavier and fall toward the ground

Why is snow white?

Bright snow blinds us with its gleaming white color because it reflects beams of white light. Instead of absorbing light, snow’s complex structure prevents the light from shining through its lattice formation. A beam of white sunlight entering a snow bank is so quickly scattered by a zillion ice crystals and air pockets that most of the light comes bouncing right back out of the snow bank. What little sunlight is absorbed by snow is absorbed equally over the wavelengths of visible light thus giving snow its white appearance. So while many natural objects get their blue, red, and yellow colors from absorbing light, snow is stuck with its white color because it reflects light. 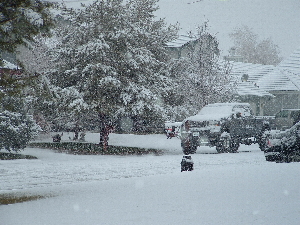 Last a few hours or several days;
Knock out heat, power, and communication services; and
Place older adults, young children, and sick individuals at greater risk.
IF YOU ARE UNDER A WINTER STORM WARNING, FIND SHELTER RIGHT AWAY