Tornadoes are vertical funnels of rapidly spinning air. Their winds may top 250 miles an hour and can clear a pathway a mile wide and 50 miles long.

Also known as twisters, tornadoes are born in thunderstorms and are often accompanied by hail. Giant, persistent thunderstorms called super cells spawn the most destructive tornadoes.

These violent storms occur around the world, but the United States is a major hotspot with about a thousand tornadoes every year.

A tornado is a violent rotating column of air extending from a thunderstorm to the ground. The most violent tornadoes are capable of tremendous destruction with wind speeds of up to 300 mph. They can destroy large buildings, uproot trees and hurl vehicles hundreds of yards. They can also drive straw into trees. Damage paths can be in excess of one mile wide to 50 miles long. In an average year, 1000 tornadoes are reported nationwide. 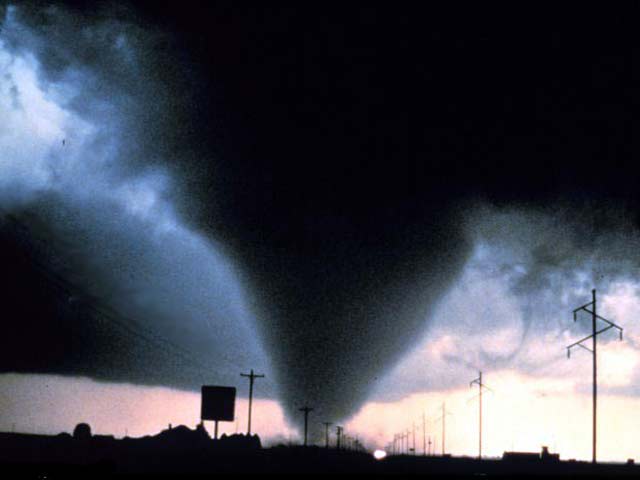 How do tornadoes form?

Most tornadoes form from thunderstorms. You need warm, moist air from the Gulf of Mexico and cool, dry air from Canada. When these two air masses meet, they create instability in the atmosphere. A change in wind direction and an increase in wind speed with increasing height creates an invisible, horizontal spinning effect in the lower atmosphere. Rising air within the updraft tilts the rotating air from horizontal to vertical. An area of rotation, 2-6 miles wide, now extends through much of the storm. Most strong and violent tornadoes form within this area of strong rotation.

What are some other factors for tornadoes to form?
Several conditions are required for the development of tornadoes and the thunderstorm clouds with which most tornadoes are associated. Abundant low level moisture is necessary to contribute to the development of a thunderstorm, and a “trigger” (perhaps a cold front or other low level zone of converging winds) is needed to lift the moist air aloft. Once the air begins to rise and becomes saturated, it will continue rising to great heights to produce a thunderstorm cloud, if the atmosphere is unstable. An unstable atmosphere is one where the temperature decreases rapidly with height. Atmospheric instability can also occur when dry air overlays moist air near the earth’s surface. Finally, tornadoes usually form in areas where winds at all levels of the atmosphere are not only strong, but also turn with height in a clockwise or veering direction.

What do tornadoes look like?
Tornadoes can appear as a traditional funnel shape, or in a slender rope-like form. Some have a churning, smoky look to them, and other contain “multiple vortices”, which are small, individual tornadoes rotating around a common center. Even others may be nearly invisible, with only swirling dust or debris at ground levels as the only indication of the tornado’s presence.

What is a funnel cloud?
A funnel cloud is a rotating cone-shaped column of air extending downward from the base of a thunderstorm, but not touching the ground. When it reaches the ground it is called a tornado. 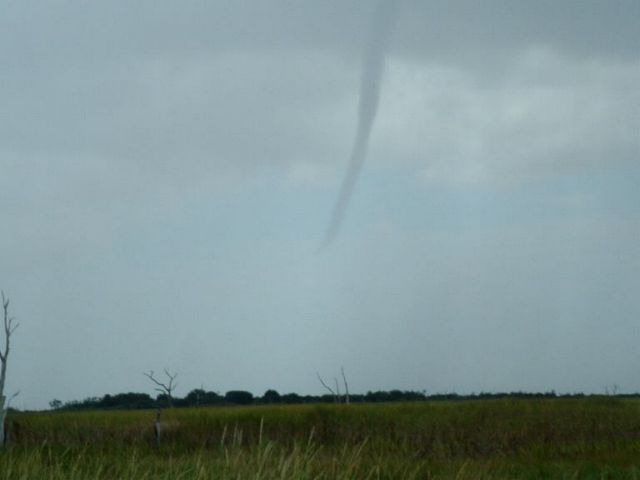 How do tornadoes stop?
It is not fully understood about how exactly tornadoes form, grow and die. Tornado researchers are still trying to solve the tornado puzzle, but for every piece that seems to fit they often uncover new pieces that need to be studied.

What is a mesocyclone?
A mesocyclone is a rotating vortex of air within a supercell thunderstorm. Mesocyclones do not always produce tornadoes.

What is a microburst?
A microburst is a downdraft (sinking air) in a thunderstorm that is less than 2.5 miles in scale. Although microbursts are not as widely recognized as tornadoes, they can cause comparable, and in some cases, worse damage than some tornadoes produce. In fact, wind speeds as high as 150 mph are possible in extreme microburst cases.

What is a wall cloud?
A wall cloud is an abrupt lowering of a rain-free cumulonimbus base into a low-hanging accessory cloud. A wall cloud is usually situated in the southwest portion of the storm. A rotating wall cloud usually develops before tornadoes or funnel clouds. 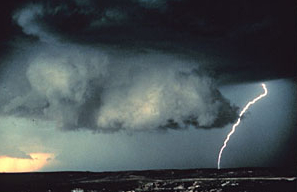 What is a waterspout?
A waterspout is just a weak tornado that forms over water. They are most common along the Gulf Coast. Waterspouts can sometimes move inland, becoming tornadoes causing damage and injuries.

What is hail?
Hail is created when small water droplets are caught in the updraft of a thunderstorm. These water droplets are lifted higher and higher into the sky until they freeze into ice. Once they become heavy, they will start to fall. If the smaller hailstones get caught in the updraft again, they will get more water on them and get lifted higher in the sky and get bigger. Once they get lifted again, they freeze and fall. This happens over and over again until the hailstone is too heavy and then falls to the ground. 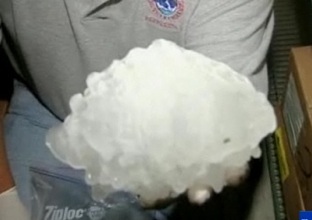 What is a gustnado?
A gustnado is a short-lived, relatively weak whirlwind that forms along a gust front. A gust front is the surge of very gusty winds at the leading edge of a thunderstorm’s outflow of air. Gustnadoes are not tornadoes. They do not connect with any cloud-base rotation. But because gustnadoes often have a spinning dust cloud at ground level, they are sometimes wrongly reported as tornadoes. Gustnadoes can do minor damage.

What is a landspout?
A landspout is a very weak tornado that is not associated with a wall cloud or a mesocyclone. It is the land equivalent of a waterspout.

What is a dust devil?
A dust devil generally forms in the hot sun during the late morning or early afternoon hours. These are mostly harmless whirlwinds and are triggered by light desert breezes that create a swirling plume of dust with speeds rarely over 70 mph. These differ from tornadoes in that they are not associated with a thunderstorm (or any cloud) and are usually very weak.

Where are tornadoes most likely to occur?
The geography of the central part of the United States, known as the Great Plains, is suited to bring all of the ingredients together to forms tornadoes. More than 500 tornadoes typically occur in this area every year and is why it is commonly known as “Tornado Alley”. Texas, Oklahoma, Kansas, Nebraska, South Dakota, North Dakota, Iowa, Missouri, Arkansas and Louisiana all make up Tornado Alley.