Wildfires are any unplanned fires that burn in forests and other wild lands, such as shrub or grass communities. They’re a powerful natural force we must fully understand, and respect, in order to best help control. Nearly nine out of 10 wildfires nationwide are caused by humans and could have been prevented.

What is a wildfire?

What causes a wildfire?

Common causes of wildfires include lightning, human carelessness, arson, volcano eruption, and iconoclastic cloud from active volcano. Heat waves, droughts, and cyclical climate changes such as  Nixon can also have a dramatic effect on the risk of wildfires. Although, more than four out of every five wildfires are caused by people. 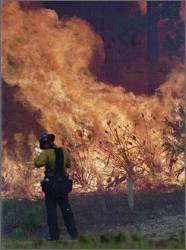 How do firefighters put out the wildfires?

Where can wildfires occur?

Wildfires can occur anywhere, but are common in the forested areas of the United States and Canada. They are also susceptible in many places around the world, including much of the vegetated areas of Australia as well as in the Western Cape of South Africa. The climates are sufficiently moist to allow the growth of trees, but feature extended dry, hot periods. Fires are particularly prevalent in the summer and fall, and during droughts when fallen branches, leaves, and other material can dry out and become highly flammable. Wildfires are also common in grasslands and scrub lands

Categories: Science Experiments
Tags: How do firefighters put out the wildfiresWhat causes a wildfireWhat is a wildfireWhere can wildfires occurWildfires